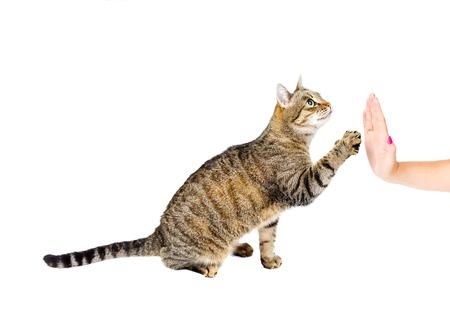 Can Cats Actually Be Trained? Yes!

When I first started working with cats, it was all new to me.  Growing up, I knew 1 cat, and like a lot of cats, I rarely saw her.  Once I was married and we had our first kitten, it was a learning experience mainly for myself.  Why was this cute little kitten flattening her ears back, why was she zooming throughout the house for no apparent reason, why did this sweet kitten turn into a scary monster when she first met our puppy?

We had to teach her that the puppy only wanted to play. How? We supervised and we made sure there were obstacles between them until we felt comfortable that both would feel safe. We also made sure their interactions were positive ones and they were rewarded for positive behavior.  They ended up being quite the pals as the years went on.

Volunteering at an animal shelter for the first time, I quickly learned that these cats were not the same as my cats.  Not because they might not have come from a home, but they were in a different environment entirely.  Even though they were being well cared for, many were scared and/or under-socialized.  That was when I realized that cats can learn to change their behavior or learn new behaviors.  Many cats were better socialized by the time they were adopted, we learned how to have positive interactions with them so we could interact with them. We even taught some cats agility!

Whether we want to teach a cat a new trick, a new behavior, change a behavior, or just to provide enrichment for them, it can be done.  Patience and consistency are key!

Some cats learn faster than others.  Discovering what will motivate them, is especially important.  Is it a tasty treat?  Is it a favorite toy?  Is it receiving attention/affection? Knowing what to provide for a reward is important.  Cats want to know what's in it for them sometimes. And, knowing when to end the training on a positive note is important so that no one is left feeling frustrated or bored.

Clicker Training is a wonderful method of training animals.  It creates a bridge between the animal performing the behavior, and receiving the treat.  The animal learns if it does the behavior correctly, when they hear the click, they know their reward is coming.

Clicker Training can be used to teach fun tricks (look them up on YouTube), to learn a new behavior or change a behavior.  In our home, Mufasa (the oldest) has learned to high five, boop (touch my finger with his nose), and to sit. Rupert can also boop and sit.  Twyla is still learning, but is mastering sit quickly.

So, yes, cats can learn. We just have to work in partnership with them to be successful.